All Heads of Circle,

This is regarding the need to promote the widespread adoption of the functionality of Digital Payment through QR code system in the Post Office, introduced in April, 2022.

2. Provision of digital payment facility is a future- oriented initiative which marks the presence of the post office in the revolution of “Digital India” campaign and contributes to India becoming a digitally empowered society. The public sector has been one strong catalyst for India’s rapid digitisation. The push for digital payment systems gained momentum due to recent reforms in the sector taken by Government, which has reinforced major shifts in payments behaviour like declining cash usage, migration from in-store to online commerce, adoption of instant payments etc. The deployment of QR code- based payment facility in post offices is a milestone in the society’s migration towards a digital economy as the Post Office is an institution of the common man whose social significance goes much beyond its revenue figures.

3. Recent transaction reports from the post offices. however, indicate that the usage of QR Code for the payment by customers continues to be low. For example, as per figures received from CEPT. in the first week of August, 2022, only 0.082% of the eligible post office transactions were carried out using the QR Code facility. In other words, only 1 out of every 1250 postal transactions are now being carried out in this mode. The basic reasons ascertained for the low figures are (i) lack of awareness about the facility among staff, (1) inability to convince/ motivate customer to make use of it and (iii) certain technological issues. Meanwhile, it is learnt from the CEPT that most of the technological issues related with the system of QR code payments are now rectified.

4. The issue related to this extreme low rate of adoption of QR code-based payments has been examined in this Directorate. It is decided that the Department needs to take focussed efforts to promote the payment through QR Code in the post offices urgently. It is necessary to promote positive attitudes towards QR code payment. both from the staff and the customers. In view of the above, it is requested to take up the following steps in each Postal Circle.

i) The facility of QR code payment system be made available across all the post offices including branch post offices, without exception.

ii) Conduct an internal awareness drive about the QR Code payment among the officers/ officials of the field units.

iii) Monitor those post offices which are lagging in the adoption of QR code-based payments, and take special efforts to rectify the situation.

iv) The field staff particularly working at counters, be instructed to encourage the customers to use the facility of QR code payment being provided.

5. Considering the urgency in the matter, these steps may please be initiated immediately The Postal Regions and Postal Divisions may kindly be co-opted in the effort urgently.

6. This has the approval of Director General Postal Services. 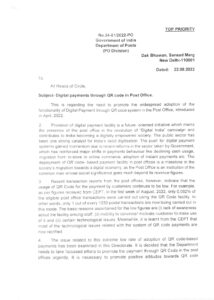 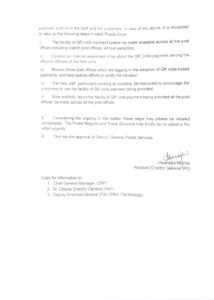