The Minister confers Anubhav Awards on 15 awardees for year 2019-20, 20-21 & 21-22 for sharing experiences and giving suggestions for improvement in governance

Dr Jitendra Singh also inaugurates Pre-Retirement Counselling for about 900 officials about to retire in next One year; 47 PRC Workshops have already been conducted so far

Dr Jitendra Singh said , Bhavishya 9.0 version was being released today with its integration with the Pension Disbursing Banks. 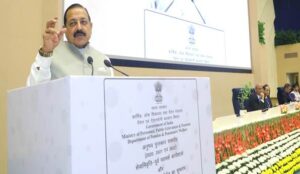 BHAVISHYA, a Portal for Pension Payment and Tracking System, said the Minister, is being integrated with Pension Seva portal of SBI and will enable Pensioners to get all information and services at one place with single login.

On completion of all phases of this integration the retirees can choose a Bank and Branch for opening an online Pension Account, check their monthly pension slips, Form 16, Status of Life Certificate as well as change their Pension Disbursing Bank through BHAVISHYA.

Dr Jitendra Singh informed that BHAVISHYA has recently been rated as the 3rd best portal among all Government of India service portals by National e-Governance Service Delivery Assessment (NeSDA). The Department of Pension & Pensioners’ Welfare (DoPPW) therefore chose this End-to-End digitized portal for the integration with BHAVISHYA as the base portal which shall finally become a single window for all Central Government Pensioners. The following portals have now been merged with BHAVISHYA window: CPENGRAMS, ANUBHAV, ANUDAAN, SANKALP & Pension DASHBOARD. 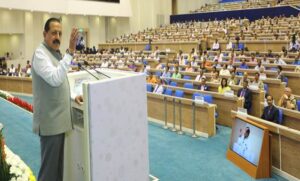 Dr Jitendra Singh said, the ‘Bhavishya’ platform was made mandatory for all central government departments since 01.01.2017 and this system is at present being successfully implemented in the main Secretariat of 97 Ministries/Departments including 815 Attached Offices, along with 7,902 DDOs on board. He also informed that as on date, more than 1, 74,000 cases have been processed on BHAVISHYA i.e. PPOs issued which includes more than 1 lakh e-PPOs.

The Minister on arrival inaugurated a Pension Disbursing Bank Exhibition in which all the 17 Pension Disbursing Banks participated to display their digital initiatives and products meant for retiring government officials. This was a first of its kind initiative organized by Department of Pension in order to enable retiring employees to take an informed decision while opening a Pension account.

Dr Jitendra Singh conferred Anubhav Awards on 15 awardees for year 2019-20, 20-21 & 21-22. Due to the COVID-19 pandemic, Anubhav Award Ceremony for previous 2 years could not be held. The Anubhav portal was launched by Department of Pension & Pensioners’ Welfare at the behest of the Prime Minister in 2015. The portal provides an opportunity for retiring Government employee to share their experience of working in the Government and give suggestions for improvement in governance. The Anubhav Awards ceremony was started from 2016 as an annual feature to encourage retiring government employees to share their government experience on their retirement.

Pre-Retirement Counselling for about 900 officials

Dr Jitendra Singh also inaugurated Pre-Retirement Counselling for about 900 officials about to retire in next One year. An exhibition was put up by all Pension disbursing banks to showcase their products and services to all participants who are about to retire in One year.